As of 5:09 PM yesterday I have been on vacation. Officially. It's quite a wonderful feeling really. If you haven't already guessed by some of my updates I've been pretty burnt out lately. My wife, Lexi, and I are travelling to my old stomping grounds of upstate NY - where I was born and raised. I won't be updating while I'm away, BUT when I come back I should have some new music! I'm already anxiously awaiting my Grave Robber pack but being in NY gives me the opportunity to visit some second-hand shops that sometimes have really cool gems just laying around. Here's hoping I find some.

I'm also going to do my "Favorite Albums of 2011" closer to November/December instead of October like I usually do. I've been compiling the list and it's actually pretty long. Longer than I thought it would be for being broke for several months out of the year.

Anyway, hope everything is going well with all of you. God bless.
Posted by The Old Man at 11:16 AM No comments:

Labels: A Place for Random Announcements I guess Amy Lee has some rule about releasing new albums less than five years apart, 'cause dang. She sure does take her sweet time, doesn't she? Well, no matter. The new Evanescence is here and... it's a grower. Not bad, just a grower. There are a couple reasons for this. For one, some of the textures of the earlier albums have been replaced with a giant wall of distortion that runs through most of the album. The guitars are really up front in the mix and LOUD! I love chunky guitars and the riffs here are cool. The problem is that they get in the way. It feels like you have to listen to the song around the guitars instead of them being a part. This would be great if Evanescence was a shoe-gazer band, but alas. Second, during the first listen or two Amy Lee's vocal melodies tend to sound too similar from track to track. I grew to appreciate them after awhile but the combo of the guitars and vocals make a lot of the songs sound the same. Thankfully, after a few listens I began to pick out the songs, enjoying them more.

I also think this album is more commercial than the artsy The Open Door. "What You Want," "Sick," and "Oceans" are all cool hard rockers designed for radio airplay. My favorite songs are probably "Swimming Home," an ethereal ballad and "Say You Will" - a hook filled bonus track from the deluxe edition. Seriously, people, what's with leaving some of the best tracks as bonuses? If I had my way I would have swapped out "My Heart is Broken" and "Lost in Paradise" for "Say You Will" and "Disappear." Don't get me wrong, I enjoy Evanescence but it's definitely not breaking any new ground.

Now let's talk lyrics for a second, shall we? Amy Lee is married, rich, and famous. Just how tortured can she really be? I mean, I know that celebrities can have problems but the angst in these lyrics seems rather manufactured to me. As my wife mocked, "My heart is broken... from being so rich and famous!" At one point Amy Lee sings, "I now know what it's like to be lost" or something like that. Really? It just feels fake to me, especially hearing about how recording this album was so much fun for her. I would rather she just write happy lyrics. That's okay, y'know!

Useless Fact: There were several pre-order packages offered and we, of course, got the deluxe edition with four extra tracks and a DVD. Haven't watched the DVD yet though.
Posted by The Old Man at 7:36 PM No comments:

I've been breaking my "At Least 5 Updates a Month" rule. I is a sorry. It's been really busy around here lately and I've felt pretty burnt out. On the plus side I've got some good music coming up. We got Evanescence's new album in the mail the other day and I've given that a few spins. In short: it's a grower. Also, Grave Robber's new album is coming out the seventh of next month and I'm really excited about that one! Also, Megadeth's Thirteen will be out on Nov. 1st. So there's some good stuff coming but the rest of November and December will be pretty sparse again. I wish it weren't so, but it is. Hopefully the new year will hold some promise. Thank you to everyone who visits!
Posted by The Old Man at 6:43 AM No comments:

Labels: A Place for Random Announcements 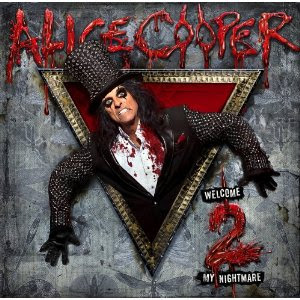 I've been complaining a lot lately about not having any new and interesting music. Well, the other day at Walmart I saw this, Welcome 2 My Nightmare. I don't have much experience with Ol' Black Eyes. I've owned both The Last Temptation and Brutal Planet and they never did much for me. I've never heard the original Welcome to My Nightmare either. I know I'm probably making Alice fans cringe right now! Anyway, on a lark I decided to get this because it looked different and interesting. All in all I'm really glad I did.

"I Am Made of You" is a phenomenal worship song and one of the main reasons I picked this up (I'd heard samples on Itunes). Alice uses auto-tune for the verses but I think it gives the song a very ethereal effect. It's a slower paced song and kind of an odd way to kick off the sequel to one of Alice's most popular albums but I can't argue with the results - I love this song. "Caffeine" treads in what I assume would be normal Alice territory. It's peppy and catchy and I like it too. Some of my other favorites are the country flavored "A Runaway Train," the bizarre "Last Man on Earth," the club anthem "Disco Boogie Bloodbath Fever." Alice kind of raps on it, which apparently annoys some long-time fans. However, in context of the song I think it makes sense as the character is mocking club culture anyway. There are some weak moments here though. I'm not too crazy about "Something to Remember Me By." It's a love song. It's not bad or anything but it just kind of sits on the disc around all these fun, creepy songs. I don't skip it, but it's definitely not a highlight. Oh, this album also features Kesha. You know... friggin' Ke$ha. I was surprised that the song featuring her ("What Baby Wants") is actually one of my favorites. Weird huh? "The Underture" features pieces of songs from both Nightmare albums. It's okay but it really just makes me want to get the original Nightmare disc.

Useless Fact: I've heard that Alice was planning on continuing the story from his last album, Along Came a Spider, when he decided to to a sequel to Welcome to My Nightmare instead.
Posted by The Old Man at 8:56 AM 1 comment: