So for my birthday the other day my dad gave me some money with the specific instructions that I get something for myself for a change. So I did... 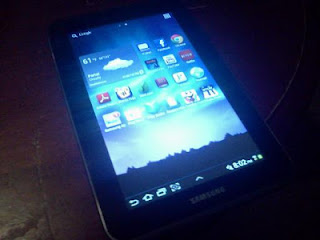 ...a Samsung Galaxy Tablet. I've been wanting something like this for awhile. I have to say - I absolutely love it. It's only 8 GB so I can't stuff it with music and I can't really blog on it, but I use it for everything else. It's nice not to have to boot up the computer just to check my email. I didn't realize how expensive Kindle books are though! I thought they were supposed to be cheaper.

Anyway, there are a couple of problems (not dealbreakers, though). The tablet wants to search for wireless connections constantly. It does it even when it's already connected. I can't imagine this is good for battery life, which is also not superb. And for some reason it wants to update all the time.

Every now and then I take a look back at my childhood (okay... maybe more than "every now and then") and think about some of the things I miss being a music fan back in the day.

Now I know there's still music magazines out there, but I'm talking specifically about the Christian ones. CCM, Heaven's Metal, Harvest Rock Syndicate, and even This Prophecy were all part of my childhood. I still get magazines in the mail and it's still a thrill. Unfortunately  every single one of the magazines I mentioned died off at some point. Of course, the Christian music scene isn't what it once was but I still miss reading about the newest releases, news, and interviews. On the potty.

This one is kind of silly. It's a LOT easier to listen to samples today on Itunes or Amazon or whatever. Even so, I still kind of miss taking a fistful of tapes to the tape deck and sampling the latest releases. I always thought it was kind of weird that secular stores never did that sort of thing. I guess the Christian bookstores didn't want to deal with returns, so they let people preview what they were getting.

3. A Lack of Information

At strange as it sounds I kind of miss the days where you didn't know everything about everyone all the time. Where information on your favorite thing wasn't mere keystrokes away. There was a lot more mystery about your favorite artists. If you found someone who'd met one of your "idols," it was fun to listen to their stories of how they were like. Scandals could be contained - so as to preserve my illusions that these people I looked up to were actually living the kind of lives they sang about. I guess I could just not read the internet anymore, but c'mon! That's un-possible!

Closely related to the last point - the lack of information provided many wonderful surprises back in the day. I'd walk into the local Christian bookstore and surprise! A new Deliverance or Tourniquet. It was like a mini-Christmas! Nowadays I pretty much know months in advance when something is coming out. And while waiting for that release date can be fun (as well as preordering for special bonuses), I do enjoy the surprise. It actually happened recently with the new Coheed and Cambria album. Still don't know how I missed that one!

Is there one anymore? I don't even know. Granted, I do think it's actually better this way. However, I won't pretend that I don't miss it... just a little. It was a cool little community to be in. If you met someone who liked the same bands you became instant friends. Christian music festivals were a dime a dozen and featured a lot of great bands.

Don't get me wrong - there are a lot of things I like about the present. I like having to buy CDs online because then I get packages in the mail (which is like mini-Christmas). I do like being able to window shop for any band or style on Itunes. So it's not bad at all. This site's mostly about my nostalgia anyway - so there ya go!

Labels: A Place for My Music Musings

Coheed and Cambria - "The Afterman: Ascension" 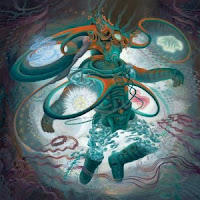 Somehow Coheed and Cambria released an album last year without me knowing it. I have no idea how that happened. Probably because I became significantly less interested in the band after the lackluster Year of the Black Rainbow. However, I'm happy to report that Black Rainbow was a simple misstep versus a downward spiral as The Afterman: Ascension is a fine album and restores my faith in the band. Perhaps some of that has to do with a couple longtime members returning to the band (like Josh Eppard on drums). After the usual intro-type track the band plows into "Key Entity Extraction I: Domino the Destitute" which immediately recalls some of the more epic tracks from 3: In Keeping Secrets of Silent Earth. However, Ascension also takes the band into new territory with the title track and "Key Entity Extraction IV: Evagria the Faithful" which are two of the more ethereal, atmospheric tracks. The closing track, "Subtraction," with its combination of electronica and acoustic guitar recalls Claudio Sanchez's side project, Prize Fighter Inferno. The only complaint that I have is that it's too short. Granted, it's only part one of a double album but once it was done I was hungry for more. Which is usually how you want to end things, now that I think of it.

The story is a prequel to every album that came before it. It tells the story of Sirius (or Cyrus?) Amory and his discovery of the Keywork. As he explores he comes to discover the nature of the Keywork itself. It's a lot more straightforward a tale than any of the previous albums. Claudio's actually explained each song on the band's website.

Useless Fact: "Key Entity Extraction II: Holly Wood the Cracked" was written about a girl who made a video about Claudio Sanchez and the band. Apparently she was kind of a raving lunatic, accusing Claudio of being a racist, among other things.
Posted by The Old Man at 11:14 AM No comments: 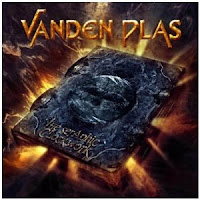 I'm a little disappointed with The Seraphic Clockwork. After the phenomenal Christ 0 I was excited to get another Vanden Plas album. While this album is certainly shows off the band's chops, the songs aren't quite as memorable or as catchy as Christ 0. In fact after several listens I still couldn't recall even one song. It's only now, after several more listens, that I'm able to remember the hooks. It's not bad to listen to at all - it's just not nearly as accessible. Oh, and the story is all kinds of crazy goofballs. Let me try to explain it. There's a 16th century Roman named Tio. He builds a time machine and eventually finds out he's Judas Iscariot. Oh, and there's a woman named Mia, "the Ravenman," and some paper demons that fit in there somewhere too. Tio lives in a world where Jesus was never betrayed and has to go back in time to betray Him. Compared to the more down-to-earth and personal story of Christ 0, The Seraphic Clockwork's lyrics can be hard to attach to emotionally speaking. I'm hoping this will grow on me.

Useless Fact: "Elyson" is a bonus live track that comes from the band's work with musicals, I think.
Posted by The Old Man at 8:25 AM No comments:

Gama Bomb - "Tales From the Grave in Space" 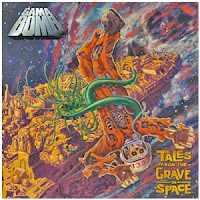 Gama Bomb - Tales From the Grave in Space
2010, Earache

Hey, remember in my review of Citizen Brain where I said I didn't think I'd want disc after disc of this? I lied. I told a dirty, dirty, lie because I could very well have more of this. Especially after listening to Fueled By Fire - they just made me hungry for better thrash. So I bought this. It's packed full of the same speed/thrash/punk fusion as the last disc. The theme on this album seems to be old B-movie horror stuff. The liner notes are made up to look like an old pulp comic book. Pretty creative if you ask me. Though they do skimp on the lyrics - only having a few lines for each song and that kind of stinks. I also don't think the songs are quite as distinctive as on the last album. It took a lot more listens to pick out the hooks. A fun album, but not quite as good as Citizen Brain.

Useless Fact: I think "Polterghost" is about the movie "Poltergeist." At least it sounds like it. Also, "We Respect You" is a tribute some of the band's favorite 80's actors like Steve Guttenburg and Ronnie Cox (to name a few).

Hello everyone! I hope everyone had a happy and safe New Year's Eve and a good New Year's.

Just wanted to pop in to say there's gonna be some changes 'round here in 2013. First of all, I'm not going to be posting as often as I did. I tried to strive for five posts a month, but I just don't have it in me anymore. Life has gotten too busy. I will try to post when I can, but it's gotten so hard to do anything lately I can't promise this blog will get any love. Last year my other blog went on hiatus for the same reasons. I'm just too tired. Oh well.