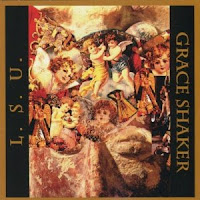 I've never been a huge L.S.U./Michael Knott person, as evidenced by the dearth of his stuff on my blog. But the stuff I like, I absolutely adore. Now my L.S.U. experience comes through Shaded Pain and The Grape Prophet, neither of which did anything for me for some reason. Grace Shaker, on the other hand, is an amazing, poignant album about weakness and grace. I would go so far as to say it is one of the finest and most essential Christian albums ever crafted. All ten songs are awesome and essential to the theme of the album. It's also filled with some of the best lyrics this side of Steve Taylor. "When the sick need a physician, sometimes the healthy come cuttin' instead of stitchin'" (from "Christ Saves") for example. I may be wrong but I think this is a concept album about alcoholism which makes sense as I believe bassist Brian Doidge has had some struggles in that area. This is definitely one of those albums every collector should have.

Useless Fact: "Double" also appeared on an album for Mike Knott's other band The Aunt Bettys.