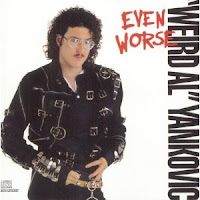 Even Worse was my first "Weird Al" experience. Since Michael Jackson was HUGE at the time he provided a nice target for people like Weird Al. The video for "Fat" was hilarious and I was pretty amused with the rest of the songs back in the day. However, I actually think this is one of Weird Al's weaker discs as it doesn't quite seem to hold up as well as Off the Deep End or even Alapalooza. Granted, it's not that I think it's terrible, it's just not as good as I remember. There are some gems here though - I like "I Think I'm a Clone Now," "Lasagna," and "Melanie." I also like "Velvet Elvis" more now than I did when I was young. I don't think "Alimony" is particularly inspired nor is "(This Song's Just) Six Words Long." The Swirling Eddies would do a better version of that type of song years later. Not much more to say, really.