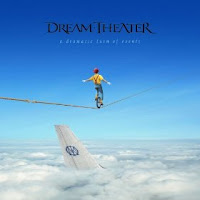 1. On the Backs of Angels
2. Build Me Up, Break Me Down
3. Lost Not Forgotten
4. This is the Life
5. Bridges in the Sky
6. Outcry
7. Far From Heaven
8. Breaking All Illusions
9. Beneath the Surface

So I guess I'm a full Dream Theater fan now. After all, I've gotten more and more DT and only disliked one (Systematic Chaos). So... how does the band fare after the departure of cornerstone Mike Portnoy? Answer: pretty good actually. In fact, I think anyone who says "the band sucks now that Portnoy's gone" is crazy and biased. A Dramatic Turn of Events is a fine album. It's vibrant and varied. You can tell the guys are really giving it their all and trying to prove to the fans that it wasn't all Portnoy. The drums are pushed back in the mix a bit and the bass brought out - which isn't really a bad thing if you ask me. I think there's also a little more variety in the songs here. I don't think I've heard a fully acoustic ballad from these guys but the album closes with one of the most beautiful ones I've heard ("Beneath the Surface"). I do think "Build Me Up, Break Me Down" is a tad too long but that's my only complaint. Actually, there's nothing in this album that makes me fear for the band. Quite the opposite, I'm excited to see what they'll do next.

Useless Fact: There is some throat singing in "Bridges in the Sky." We were listening to it in the car and my daughter said, "Is that a burp?" She's so cute!
Posted by The Old Man at 8:46 PM