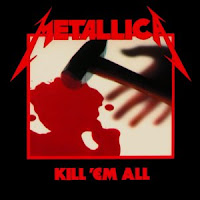 So I may have shared about how my cousin and I would Christmas shop with my grandparents. They would give us twenty bucks and we were supposed to buy presents. Naturally, we'd buy lots of cheep things so we'd have enough money for tapes later. The first ever time we did this I got Metallica's Kill 'Em All. My grandmother's reaction was, "Oh my..." in that sort of huffy-sigh she always does when something out-of-sorts happens. I was like, "Um... they mean kill all the bad people.... yeah...." Anyway, I got this after getting the other ones. Naturally, it's a classic. The band was young and hungry and it shows in every note. They were a little less thrash and more speed metal/punk here - clearly showing their Motorhead influence (in songs like "Motorbreath" and "Whiplash"). They're lyrics weren't quite as sharp either, often dealing with violence, fast living, and how awesome metal is. Several songs have Dave Mustaine in the writing credits. Most people know "The Four Horsemen" is also Megadeth's "Mechanix."

Useless Fact: The first printing of this album had two extra tracks on it. "Blitzkrieg" and "Am I Evil?" (a Diamond Head cover) were two covers that were left off subsequent printings. I know this because they tape I bought had those two tracks and I've never seen another edition with those two tracks. It makes me sad.
Posted by The Old Man at 8:13 PM