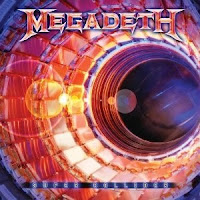 I was surprised by how much ire Super Collider has drawn from fans. After the title track was released people were decrying the album as a dud. A return to the pop-rock of Risk. Is that true? Let me think for a minute...uh.....NO! It's not even remotely true. While the album is a lot more melodic and diverse it's far from bubblegum. Songs like "Kingmaker," "Burn!," and "Built For War" are infectious metal tracks. Then there's "Dance In the Rain" which slows things down until blasting away at the end. It also features Disturbed's David Draimen on vocals. He's okay. He doesn't hurt the song any but I wasn't wowed. "The Blackest Crow" is also of note as it features banjo and a little (a smidgen) of country flavor. Don't get me wrong, it still rocks hard. The album closes with "Cold Sweat," a Thin Lizzy cover and one of the best tracks on the album. It almost seems like Dave Mustaine wanted to make more of a hard rock record. Except, unlike Cryptic Writings and Risk where his hand was being forced, Super Collider is pure Dave. I do like this album a lot, even if it's missing some of the furious thrash riffing Megadeth is known for. But honestly, after having consistently great albums since 2004's The System Has Failed, Dave & co. don't really owe me anything. I'm content to just sit back and enjoy whatever they create. I will admit that the album does seem a tad rushed. I think some of these songs could have used a bit more polish. A minor quibble, however. I don't know how Super Collider will stand the test of time, but for now it's definitely a fun summer listen.

Useless Fact: The band must have visited the famed Hadron Super Collider because the liner notes are filled with pictures of it. The artwork (bland cover aside) is quite beautiful.
Posted by The Old Man at 9:06 PM