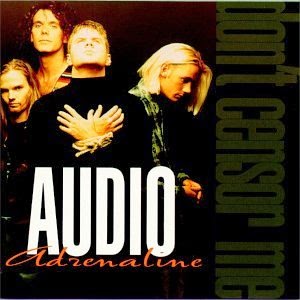 I became familiar with Audio Adrenaline through their debut album. It was awful. It's mostly remembered (if it's remembered at all) for two "black sheep" songs, "DC-10" and "My God." Both of these sounded like License To Ill era Beastie Boys or maybe Anthrax's I'm the Man. Anyway, I actually liked these songs. The rest of the album was lame, generic Christian pop. I'm not really even sure how those two songs made it on the record. I mean... they are really different. Their second album, Don't Censor Me was still Christian pop but the song writing was a lot better and they were starting to find their own sound. While they wouldn't quite achieve their own identity until Bloom, this is a decent album - leaps and bounds better than its predecessor. I loved this as a teenager but I don't think it's aged well. I still love "Let Love" and "Scum Sweetheart." I will also defend "Big House." Yes, it's cheesy and corny but it was supposed to be that way. It's just a fun song and there's nothing wrong with that. I'll accept it in the spirit it was intended. The rest of it is alright except the fantastically boring ballads, "My World View" and "Rest Easy." I wonder what world we would live in if the band had chosen to emulate "DC-10" and "My God" instead?

Useless Fact: Audio Adrenaline were "discovered" by DC Talk if I remember correctly.