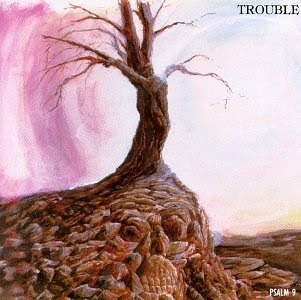 Trouble was another of those bands I'd always heard about as a youth but never actually listened to. They'd gotten a reputation for being Christian even though the band itself was not. They were just tired of all the satanic stuff in metal and decided to go the opposite direction. I recently watched a YouTube video were Scott Waters (from Ultimatum and No Life Til Metal.com) recommended this disc in his Christian picks (though he admitted the band wasn't really Christian). So I searched You Tube to see if someone had posted the album and lo and behold, I heard some pretty awesome metal. A quick trip to Amazon later and it was on my iphone. Trouble are usually referred to as doom metal which is characterized by slow riffing - made popular by Black Sabbath. There are some slow, doomy parts on Psalm 9 but most of it is just pure, awesome heavy metal. Be sure to enjoy the awesome guitar work of Bruce Franklin who would later go on to form Under Midnight. I can't believe it's taken me this long to check this out. It's definitely a metal classic that should be in every metal-head's collection.

Useless Fact: This album is actually self-titled. It wasn't until later pressings that the record company made the title Psalm 9.
Posted by The Old Man at 7:56 PM