Beastie Boys - "To the 5 Boroughs" 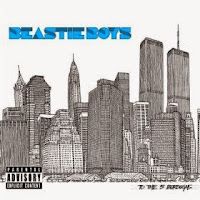 Anyway, our first stop on the Beastie Boys tour is To the 5 Boroughs which a lot of fans think is one of their worst albums. Naturally, I love it. I used to own this back in the day and got rid of it, but I can't remember why. It's just straight forward old-school rap without any distorted vocals or instrumental experimentation. There's also a lot of profanity and leftists politics but that doesn't bother me anymore (maybe that's why I got rid of it way back). I'm just too old to get upset by people expressing their opinions - though I do disagree with some of the things they say on here. It's definitely not the genre-bending, boundary defying stuff they were trying in the 90's that's for sure. I think they just wanted to do an old-school album and pay tribute to their hometown - especially after 9/11. They do this quite admirably in the title track. No, this album might not be "their best" but it's catchy and clever nonetheless and I think it deserves a bit more credit than it gets.

Useless Fact: Notice the cover art has the twin towers pictured even though this came out in 2005. The liner notes also include the lyrics, which is rare for a rap album.
Posted by The Old Man at 9:39 AM