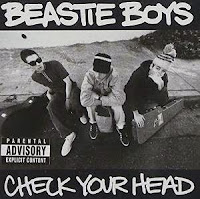 Paul's Boutique, the B-Boys' sophomore album was a critical success even if that didn't translate to spectacular sales. For their follow-up, Check Your Head, the band picked up instruments and decided to be all experimental and what not. The result is, not surprisingly, very experimental - mixing their old school hip-hop with funk, alternative rock, and even some world music. I remember I had a friend at church once that had recently got the album and was like, "Man... I don't know what's going on with them!" I could see where it could be quite a shock to someone not prepared for it. Let it be known that the instrumentation is stellar and, might I say, who knew Adam Yauch was such an accomplished bass player? Honestly, though, I don't like this one quite as much as Ill Communication because I think there could definitely stand to be a bit more actual rap on here. That being said, I can also see why a lot of people cite this one as their favorite.

Useless Fact: Biz Markie does some "singing" on "The Biz Vs. the Nuge." It's awful... or sublime. I depends on what you think of Biz Markie.