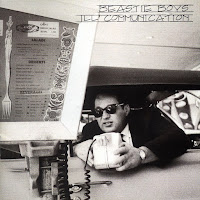 I think Ill Communication is my favorite Beastie platter so far. It starts off with, what I think, is one of their best songs ever - "Sure Shot." The album continues the somewhat experimental approach that began with Check Your Head. There's a lot of funk, alternative, some hard core punk, and even more world music. Though I actually think this one is a bit more cohesive and there's a lot more actual rap songs. I also like the instrumentals better - especially the violin's on "Eugene's Lament." This album is most well-known for "Sabotage" and its video. Hey remember when "Sabotage" was in the Star Trek reboot. As much as I love that song I hated that they put it in Star Trek. A young Jim Kirk rocking out to the Beasties after stealing a car. Seemed very un-Star Trek to me. Anyway... this is a great album and it's too bad the only thing people have heard off of it is "Sabotage."

Useless Fact: Q-Tip guest raps on "Get It Together" and Biz Markie makes another appearance on "Do It."
Posted by The Old Man at 8:35 AM