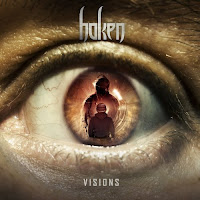 My good buddy recommended I check out Visions as we both went nuts over the band's latest full-length album, The Mountain. So I bought it, because if he says I'll like it, chances are at least 98.9% that I will like it. Surprise! I really like it! It's actually a good deal heavier overall than The Mountain. Whereas the newest album falls a bit more on the "progressive rock" side of the spectrum, this one is more on the "metal" side. The shear amount of talent here boggles the mind. The bass playing is astounding and the sense of melody is captivating. Emotion just pours out of this music. Remember when I was just getting into Dream Theater? I have to say, Dream Theater sounds almost sterile and antiseptic compared to some of the stuff I've gotten into since then. Especially this. I think I might actually like this better than The Mountain. Though I don't know... I'd better listen to The Mountain again...

Useless Fact: This does seem to be a concept album about time travel, vampires, and murder, but I'm not exactly sure what the story is.
Posted by The Old Man at 11:03 AM