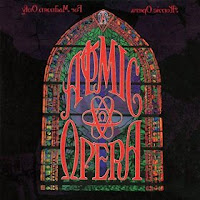 Years ago I got ahold of Atomic Opera's debut album. I listened to it one time and wasn't too terribly impressed. Fast forward to a few weeks ago when, for some reason, I decided to check them out again and was very impressed. I don't know what changed between then and now but I really got into it this time. Atomic Opera is another Texas Sam Taylor band like King's X and Galactic Cowboys. And like those bands, incorporates heavy riffs with layered harmonies for a most bodacious effect. I guess I'm channeling my inner Bill & Ted now. Atomic Opera does seem to have their own sound despite the similarities. There's also kind of a melancholy here that King's X and the Cowboys didn't quite have until years later. I can't believe I didn't like this the first time around! This particular edition is digital only but does boast a few extra tracks. "Hammer" and "Magic Castle" fit quite nicely with the original material. Having another version of "Joyride" is okay but hardly essential.

Useless Fact: Atomic Opera put out two other albums that I'm aware of: Penguin Dust and Gospel Cola. Both of which I'm going to have to check out.
Posted by The Old Man at 10:12 AM