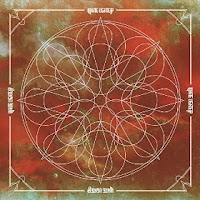 I found out about White Lighter quite by accident. I started listening to Mark Solomon's (The Crucified/Stavesacre) podcast, "Never Was" and was interested in the music he uses for the intros and transitions. Turns out it's his new band, White Lighter, which consists of Andy Pricket (The Prayer Chain) and Steve Dail (Project 86) - making it a veritable super group. It's definitely got a retro vibe to it. Some folks say it sounds a little like early Black Sabbath. However, having never heard any early Black Sabbath I can't say. However, Mark does sound a bit like Ozzy on these tracks. Not that that's a bad thing. It's not really metal either, it's got kind of a mellow swagger to it with great little riffs and infectious hooks and grooves. Take "Son of Dawn" for instance - a tune that will stay in your head for days. I'd also like to give kudos for the lyrics which are very well written... very meaningful and unique. This is definitely on my list for my top picks of 2015!

Useless Fact: As if this band didn't have enough star power behind it, Jason Martin (Starflyer 59) produced the album.
Posted by The Old Man at 8:58 PM