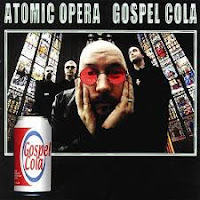 I've not heard good things about Atomic Opera's albums after For Madmen Only. Sometimes that doesn't matter and I end up really liking those albums. However, in this case, I have to say...Gospel Cola is... okay. Just okay. It's not terrible but it's not nearly as beautiful and addicting as the debut. One of the problems is that while the guitars are still chunky, they're now kicked to the back of the mix. The guitars was one of my favorite aspects so it's disappointing to see them given the short end of the stick. The other problem is the songs themselves... they're... okay. I like "Jesus Junk," "October," and "My Head" but the rest of them are just alright. Not wonderful, not crap just there. Oh well.

Useless Fact: "Jesus Junk" talks about all the stupid Christian products the Church thinks up to make money. The song mentions Testamints - which I called out as stupid as well when they came out. There's also quotes at the end of the lyrics from "Bad Buddha" which vaguely remind me of the quotes from Wild Sylas Tomkin back in the day.
Posted by The Old Man at 9:04 AM