Freedom of Soul - "Caught in a Land of Time" 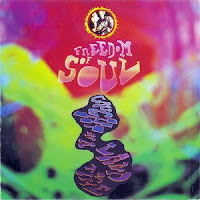 So I was listening to Mark Solomon's podcast, like you do, and one of his guests was the main man behind Freedom of Soul. Freedom of Soul was one of those rap groups in the same circle as S.F.C., Dynamic Twins, etc. For some reason I never listened to them. I have no reason for this other than I just didn't ever pick up one of their albums. After listening to the podcast, however, I decided to check them out. It's pretty good stuff. Definitely in line with that group of performers. You hear a lot of Super C and the Twins in the background doing various things. I don't think it's quite as distinctive as some of the other groups of the time, but that might just be me. There are also a couple of skits ("Cookin' Bacon" being my favorite). Even Ben Redeemed, who - if you'll remember - appeared on S.F.C.'s A Saved Man (In the Jungle) as a jackass D.J. makes an appearance. He's a little bit more sympathetic here though and it's actually the performers that kind of come off as whiny... to me anyway.

Useless Fact: Rene Vasquez (the main rapper for the group) spoke on the podcast about how he used to just listen to Gene Eugene talk about things and set things up because Rene would learn so much that way. Rene said that you couldn't really ask Gene a question and get a good answer, you just had to listen and watch while he was doing his thing.