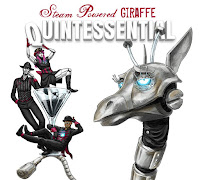 I got into SPG just before this album was to come out. Naturally, I pre-ordered it along with the other two albums. Quintessential is definitely the most modern, which actually fits with the lore of the band. The idea is that they are robots living for hundreds of years so they have adopted different styles as they go on. It's a neat idea and gives the band some room for variety. "Overdrive" includes some techno-pop...and the band actually raps. Though it works better than you would think. "The Ballad of Delilah Morreo" is probably as close to metal as the band has ever gotten. You've also got "I Don't Have a Name For It" and "Love World of Love" which are more what you'd expect from the band in terms of melodies, harmonies, and such. I like Quintessential but not quite as much as the other albums I've heard. There are a couple tracks that I'm not wild about. "Malfunction" doesn't do much for me, for reasons which I'll elaborate later. "Blue Portals" hasn't really stuck either. However, that's only two tracks out of twelve and it's balanced out by the fantastic "Photographic Memories," "Only Human," "Leopold Expeditus," and "Dream Machine." Still a good album, but so far my least favorite.

Now... about "Malfunction." It's one of those "I'm okay, you're okay"-"your flaws are great"-type songs that reminds me of that one song, "Secrets" by someone whose name escapes me. I don't necessarily mind the sentiment of loving oneself. However, it seems like songs like these always focus on the externals. It's always about one's hair or body type or whatever. I guess my problem is is that we're not okay. Humans are not okay. You are not and neither am I. We are selfish, arrogant, angry, and impatient. We have no grace for others while demanding it for ourselves. We are malfunctioning and that's not okay. So yeah.. the song itself is fine, but this is the type of stuff I think about when I listen to it. Anyway, that's neither here nor there. I'd still totally recommend this album because I love this band.

Useless Fact: Apparently, "Overdrive" was written way back in 2009 and The Jon didn't want anything to do with the song, so it stayed in song limbo until now.
Posted by The Old Man at 9:03 AM