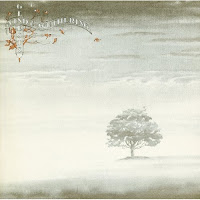 
Wind & Wuthering continues in much the same vein as Trick of the Tail in that it’s not so much about the concepts as it is the music. In fact, Wind & Wuthering could have been named Let the Music Do the Talking as the music really takes center stage on this album. There are three instrumentals and many songs have extended musical interludes. Not that that’s really unusual with Genesis, but here it seems like they were really trying to put the focus on the music. The vibe is laid back like the last album with the boys once again seeming to say, “Hey, we’re just here to play some songs.”

I’ve gone on at length in this series about Phil Collins’ drumming. I won’t take any of that back because it’s all true. However, it was this album that I noticed Mike Rutherford’s stunning bass licks – specifically on the opening track, “Eleventh Earl of Mar.” The bass seems to take front and center here and it’s all over the place…in a good way. It makes me want to go back to all the previous albums and pay more attention to what was going on. Also of note is Steven Hackett’s guitar. This is particularly evident on “Blood on the Rooftops” which starts with an absolutely beautiful and evocative classical guitar passage. Apparently, Hackett was frustrated while recording this album because he felt bits he had written were being rejected in favor of Tony Banks’ material. Truth be told I could have used some more Hackett here because acoustic classical guitar is like Reese Cups – you can never have too much.

“Your Own Special Way” serves as the lone single for this album. It shows that the band wasn’t above courting mainstream fame even way before Duke. However, while I’m not wild about this song, there’s enough to appreciate and it’s not quite so sappy that you want to stick a screwdriver in your ear. They wouldn’t get to that for quite a few albums.

One of the highlights is the three-song cycle that concludes the album. “Unquiet Slumber For Sleepers…”, “…In That Quiet Earth,” and “Afterglow” probably started life as one single song as they all fit together quite nicely. The first two sections are completely instrumental with “Afterglow” being sort of a vocal postlude to the main event. It’s not quite as epic as something like “Supper’s Ready” but then again, it doesn’t need to be. It just carries that quiet certainty the rest of the album has.

All in all Wind & Wuthering is a solid continuation of the work the band began on Trick of the Tail. I didn’t quite fall in love with it like Trick but it remained enjoyable throughout.

Useless Fact: Wuthering Heights served as inspiration for both the album title and the final three tracks of the album.
Posted by The Old Man at 12:22 PM