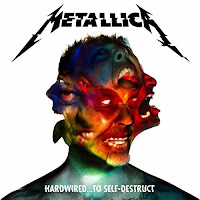 When this album was nearing release I'd read an article saying the band was "getting back to their roots." Naturally, I rolled my eyes so hard I got a headache. Usually this means nothing. I expected it meant nothing in this case. Then I heard "Hardwired" as was like..."Well... maybe they are going back to their roots." While this is far from Kill 'Em All II they definitely dip deep into that well. "Hardwired" and especially the masterpiece closer "Spit Out the Bone" are fast, heavy, but relatively simple. They definitely remind one of the band's debut album. The rest of the album is a pretty solid continuation of what they accomplished with Death Magnetic - hearkening back to their old thrash roots while still injecting more melody. Some tracks, like "Am I Savage?" and "Murder One" lean toward the Load/Reload days. My only problem is that this album is a bit too long. I think if it was one disc with nine tracks on it, it would be stellar. As it is it's two discs and the second disc definitely has some filler - here I'm thinking of "Confusion," "ManUNkind," and "Murder One." They're songs that aren't bad, but not quite the quality of the first half. Though I really like "Here Comes Revenge," and "Am I Savage?" Oh, and let's not forget "Spit Out the Bone" which I already mentioned. It's probably one of the best songs they've ever written. Not kidding there. Actually, most of the first disc, too, is full of great songs. I think a shorter album would have made it a bit tighter and more unified.

Now I can't complain too much because it's been eight years. I get the sense that the band wanted to reward fans for waiting so long. I mean, the deluxe edition (which I think is the only edition) has three disc. Disc three is several B-side type tracks and what would amount to an entire live album. Also, the packaging is stellar and it's only like ten or eleven dollars. I do hate the cover art though. It looks...weird...not a fan.

Useless Fact: I guess this album contains no riffs from Kirk Hammett as he reportedly lost his phone with all his riff ideas on it.
Posted by The Old Man at 8:41 AM