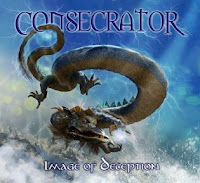 Consecrator is remembered, if they are remembered at all, for the stellar track "Free From Death" which appeared on the REX compilation, Demolition. It was a bright spot on that comp for sure (though come to think of it, that whole comp was made up of bright spots!). Years ago I saw that Consecrator had released their demo material and I was elated...then sad because I couldn't get it. It had been long out of print by the time I discovered its existence. Thankfully Roxx and No Life Til Metal have reissued it. If you liked "Free From Death" then... yeah... you'll dig Image of Deception. The sound is sort of a combination of Extraction-era Believer and Testimony-era Sacrament. It's new but still has a really familiar vibe - nostalgic in the best way possible. It takes me back to heydays of Christian thrash and borrowing rare demos from friends and This Prophecy magazine. Good stuff. It's a real shame they never got that contract because I think had the potential to be heavy hitters. I'm really hoping this reissue is successful. Maybe it can springboard into something new...

Useless Fact: Conscrator was originally known as Sacrament but had to change their name because... well... Sacrament.
Posted by The Old Man at 8:29 AM