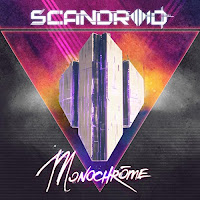 Scandroid's debut made my top picks list of 2016 last year. It was such a surprise - something I didn't even know I wanted until I really listened to it. I'm happy that Scandroid is not just a one-off project for Klayton. Speaking of which - he has been a busy little bee. Barely a year after the first Scandroid platter comes, Monochrome. Not much has changed in a year. Klayton still delivers genuine 80's synth aesthetics combined with catchy melodies and hooks. It's one of those rare instances when saying "it's more of the same" is actually a good thing. Make no mistake, Monochrome doesn't throw the listener any curve balls or surprises, but that is totally okay. Well... maybe one curve ball with "The Force Theme" which is a Star Wars cover. There's also a infectious cover of "Thriller." I love it (my whole family loves it), but I'm not gonna lie - no one can match Vincent Price for the voice over. Other than that... it's more Scandroid. And who wouldn't want more Scandroid? Everyone. Everyone should want more Scandroid.  In fact, if Klayton wanted to do yearly installments of Scandroid I would not mind a bit.

Useless Fact: I guess there is a story that ties the two Scandroid albums together about an android and his girlfriendroid. I think. I'm not really sure about the specifics.
Posted by The Old Man at 7:55 AM