The Fresh Beat Band - "Music From the Hit TV Show" 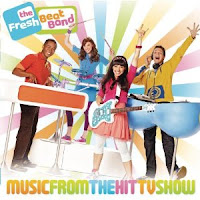 I suppose I should be thankful that my daughter's favorite show is not Barney or the Wiggles. It's Fresh Beat Band. They are notable for having songs that don't make me want to vomit and two hot women in the band. In other words - it's tolerable. However, mark my words theses are not so much songs as they are the auditory equivalent to those bugs in Star Trek II: The Wrath of Kahn. You know, the ones that go in your ear, burrowing deep into your brain, growing and growing until you shoot yourself with a phaser or Kirk comes to rescue you. Except he doesn't. No, these songs challenge all the other songs in your head and mercilessly slaughter them one by one, Mortal Kombat style, until only "Bananas" remains. Or "Good Times." It really depends on the day. We are actually thinking about dropping a considerable sum on VIP tickets when the band comes to Augusta, GA. That's how insidious this album really is. For the amount of money they're asking for VIP tickets, I should be able to touch Marina's boobs.

Useless Fact: We prefer Old Reed at our house. The new guy is not as cool. So much so that we refer to him as Reed's cousin Sneed. Also, it's pretty clear to me that while Original Recipe Marina was a better singer, New Marina is a better dancer and drummer. Both hot though.
Posted by The Old Man at 1:13 PM