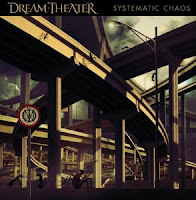 I picked up Systematic Chaos because, like Train of Thought, opinions on this one seem to be divided. I really liked Train of Thought so I figured I might like this one too. Unfortunately, I'm on the opposite side. Systematic Chaos, while certainly an example of flawless musicianship (as per usual) just doesn't hold my attention. The first track doesn't really go anywhere, waiting for the second half of the song at the end of the disc to really assume an identity. Tracks like "Forsaken" and "Prophets of War" are completely forgettable. "Constant Motion" is another one of those Metallic-esque tracks, but I don't think it's as good as the band has done before. Two tracks I really enjoyed were "The Dark Eternal Night" and "Repentance." The former is heavy and interesting and the latter is the ballad part of Portnoy's Alcoholics Anonymous suite. Oh, and what's up with the lyrics? Each song (aside from "Repentance") is filled with "dark" fantasy stories. I guess the guys were boning up on their Iron Maiden or something. Anyway, while I've grown to really love this band, this particular album doesn't do much for me. Oh well, they can't all be winners.

Useless Fact: "The Dark Eternal Night" is based off of an H.P. Lovecraft story. While "In the Presence of Enemies" was based off of some manga about a Korean priest... I think... at least according to Wikipedia.
Posted by The Old Man at 1:00 PM