Freak Kitchen - "Land of the Freaks" 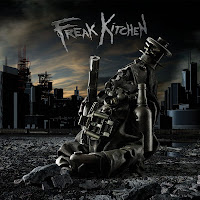 Freak Kitchen is a fun little band. They've got a progressive metal/rock vibe, an 80's rock vibe, and sometimes a dance/pop vibe. These three influences are blended into some of the most interesting and infectious music I've heard in a while. The album starts off with the pounding "God Save the Spleen" then follows that up with the more pop "Hip Hop Hooray." The third track, "Teargas Jazz" is a bit more progressive but every bit as catchy. These songs stay in your head for days. You'd think because of some of the flippant song titles that the band would be a bunch of goofballs. Well, they kinda are - the lyrics are smart alecky and clever, but the topics they tackle are pretty serious. From black market organ transplants to racism to personal responsibility, they cover a bevy of subjects. They have a way of making you laugh but thinking as well.

Useless Fact: "Teargas Jazz" seems to be about the band being in Dehli when the Danish cartoonist published those cartoons that made Muslims mad. They were stuck in this country at the time, apparently trying to convince people that they weren't Danish. They tell it better in the song though.
Posted by The Old Man at 5:49 PM