Daniel Amos - "When Everyone Wore Hats" 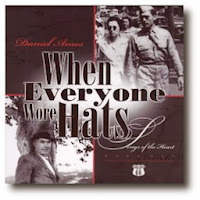 The Original Songs of the Heart

DISC TWO: When Everyone Wore Hats
1. Donna Nieche and Her Super Race of Kickboxing Ubber Parrots
2. Piano Intro
3. The Glory Road
4. Can't Take My Eyes Off You/Get Back Into the Bus, Aloha
5. Evangeline
6. Uneasy Lies the Head of the Confidence Man
7. The Organ Bar
8. Our Night To Howl, Time to Go Dancing
9. Sins of the Fathers
10. Loveland
11. When Everyone Wore Hats
12. My Hand To God/Piano Outro
13. The Glory Road (Reprise)

Songs of the Heart is probably one of my top favorite Daniel Amos albums. It's not quite as popular as some of their other albums but it's definitely close to my heart for various reasons. I've always wanted to own the bookset the band put out years ago. Now I've finally got it! It's actually a big package - it won't fit in a normal size CD rack that's for sure. The big draw for me was the acoustic reworking of Songs. It kind of takes a listen to two to get used to the new arrangements. It's also very relaxed - what Terry called a "warts and all" sort of recording. I like it though it's not quite as good as I'd hoped but nothing I'm super disappointed with. I don't think it will replace the original Songs for me. The third disc contains a some readings from Terry and two new songs, "Your Hidden Hand" and "Devil's Elbow" (later recorded by the Lost Dogs). I'm surprised that "Turn This Off" didn't make it onto the Hats disc. The interview is good but the interviewer, Jason Martin, almost sounds like he doesn't want to be there.

Now I'm a sucker for cool packaging and extras and this reissue delivers. There's some ruminations by Terry Taylor about the album, a full short story about Bud and Irma Ackendorf, liner notes about the rearrangements AND full lyrics. I'm really glad that I got it, but it's definitely for collectors and fans.

Useless Fact: Just order the set and read the book - plenty of facts in there!
Posted by The Old Man at 8:52 PM