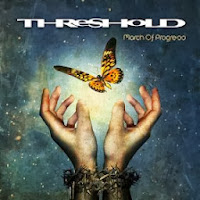 At first I wasn't that thrilled about Threshold. I'd listened to their live album Critical Energy and, while it wasn't bad, I wasn't quite enamored with it. Then I heard that former vocalist Damien Wilson (who's performed on both Ayreon and Star One) was returning to fill in for the former vocalist who had passed away. I love Damien Wilson's voice. I wanted to get this album just to listen to his voice. March of Progress is pretty good. It's not as progressive as Dream Theater or anything but that's not bad. The songs are very accessible and catchy. There's are some slammin' metal riffs, which is always a plus with me. However, I do think "That's Why We Came" is kind of a boring ballad and "Don't Look Down" isn't quite interesting enough to justify its eight minute running time. Did I mention I love Damien Wilson's voice yet? Because that pretty much makes this album for me.

Useless Fact: I think the album concept has to do with rebellion against totalitarian governments.
Posted by The Old Man at 10:16 PM