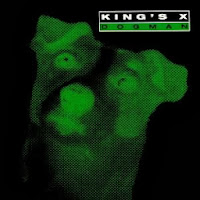 Dogman was the first album King's X recorded without the help of long-time producer Sam Taylor. The differences are immediate. Dogman is heavier, darker, and a lot less progressive. There's also less of an emphasis on three-part harmonies and Ty barely sings lead. That's not to say it's not good, it's awesome. Definitely a classic - if a little depressing at times. Naturally, the C.S. Lewis inspired, Christian slanting lyrics have been dropped in favor of introspective brooding. Again, not bad just different. I was really worried about the band back in the day because I took this as a sign that they were no longer Christians. Apparently I was right. Still, Dogman is a great record and, in retrospect, definitely worthy of the King's X legacy.

Useless Fact: The dog on the cover came in different colors: red, blue, green, and yellow. The one I have now is yellow. The one on my original cassette was red. Also, a box set was released with the first five albums. However, it hasn't been remastered or anything and there aren't any extras. Still, if you've never gotten into King's X before that box set is the place to start!
Posted by The Old Man at 8:12 PM