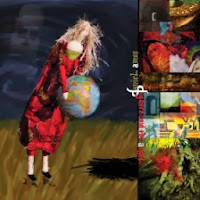 1. Forward in Reverse
2. Jesus Wept
3. Dig Here, Said the Angel
4. Our New Testament Best
5. Love, Grace, and Mercy
6. Now That I've Died
7. We'll All Know Soon Enough
8. Waking Up Underwater
9. The Uses of Adversity
10. The Ruthless Hum of Dread
11. The Sun Shines On Everyone

I've listened to this album several times and I still don't feel like I've listened enough to review it. I think that's a good thing. A lot of people liken Daniel Amos' new album to Kalhoun or Motorcycle. I don't really see that at all - I think Dig Here is its own animal. I suppose the fact that the album contains eleven self-contained songs which are mostly uptempo rockers is similar, but that's about it.

There are some artists out there whom I've discovered, loved, and then eventually realize that they're one (or maybe two) trick ponies. Daniel Amos is not like that. Each album is fresh. Each album is unique. Dig Here seems to be the band's ruminations on death, suffering, and heartache. Ironically, the morosely titled "Now That I've Died" is probably the most optimistic. It seems like Terry Scott Taylor has been doing a lot of thinking about what may lay beyond and we get to take the journey with him. I like this album. I like it a lot. I feel like this is going to grow on me throughout the years - especially as I get older. Here's hoping the band doesn't take another decade to release another album!

Useless Fact: Dig Here was a Kickstarter funded release. I believe they raised over $30,000 which allowed for vinyl versions of the album to made. Y'know... if you're into that sort of thing.
Posted by The Old Man at 10:51 AM