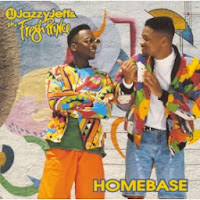 Wow. Those jackets. They could not be any more early 90's. I think there's more colors in those jackets than is actually allowed by law. Anyway, Homebase is sort of a comeback album.  And In This Corner... didn't do very well so the boys took a little time off, starred in a hit TV show, regrouped and released this. "Summertime" was a massive hit. However, it's the only single from this album. I like this one alright but it's not my favorite. It's a bit more mature - focusing more on instrumentation and smooth jazz stuff. No problems there, but it's not quite as fun. In fact, there's a couple songs that just leave a bad taste in my ears. First there's "A Dog is a Dog" in which the Fresh Prince admits that, yes, he'd like to bed every single women he sees and that should be okay. Then there's the mean-spirited "You Saw My Blinker" in which Fresh Prince raps about breaking some girl's wrist for spurning his advances AND badgering a 90-year-old woman. As a whole it's okay but it'll never dethrone He's the DJ as my favorite album.

Useless Fact: Several guest MC's appear on "Trapped on the Dance Floor," which is a first. I am way too lazy to look up who the actual guests are.
Posted by The Old Man at 10:15 AM