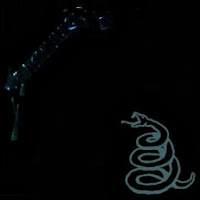 After the band hit it big with "One" I think they decided to court MTV fame for all it was worth. Metallica (aka The Black Album), is far more commercial than anything the band had done before. They made several videos from this album and they were all in heavy rotation back in the day. I usually don't respect any person that says "Enter Sandman" is their favorite Metallica song or that it's their best song. Because seriously, that's just silly. That being said, even though the band's self-titled album eschews the more progressive tenancies of the past it's still just as heavy. In fact, I'd say this album was responsible for bringing truly heavy metal into the mainstream. I realized the other day that I didn't have this album in the vault and I was all, "Why don't I have this?" So in it went.

Useless Fact: I believe "The God That Failed" was about James Hetfield's mother. His parents were Christian Scientists and when his mother took ill, they refused and medical treatment and she died. I can understand where he's coming from with the song, but I still can't say I'm wild about it.