Deliverance - "Hear What I Say!" 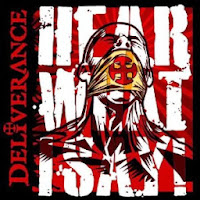 I am so happy Deliverance's last album finally saw the light of day. If you'll remember, the big D has planned a new album since 2010. It was originally supposed to be called The Annuls of Subterfuge, and a return to the band's old thrash roots. However, it was cancelled some years later only to be resurrected in 2013 as Hear What I Say! It's been billed as the band's official "last album" (though that's been said before!) but instead of a thrash album it's got a lot more variety. It's almost a celebration of all the different eras of the band. The first two tracks, "Annuls" and "Angst" are prime thrash cuts while songs like "Hope Lies Beyond" have a definite River Disturbance vibe. Both "Detox" and "Nude" have a sound not unlike Learn. There are even some shades of Camelot here and there. "A Perfect Sky" is notable for being an acoustic ballad featuring only Jimmy's voice and guitar. "Where Eagles Dare" is an Iron Maiden cover that the band pulls off with style. As a whole the album rocks and will please fans of the band who appreciate all of their material. If you're only into Weapons well... get over yourself! There are awesome songs on here and it all truly sounds like Deliverance. I've always thought there was something "off" about As Above - So Below musically - like I'm wearing my shoes on the wrong feet while I'm listening. There's no such feeling here. As a bonus, the production is excellent and the mighty Jayson Sherlock (formerly of Mortification and Paramaecium) provides the drumming. It sure is a pleasure to listen to that man drum again!

The only problem with Hear What I Say! is that it's just too darn short. Not counting the intro, the cover, and the German version of "Detox" there's only seven new songs here. "Hope Lies Beyond" is actually a cover from an indie band called Sombrance bringing the total to six. I really wish there could have been a couple more tracks here. It seems like "Annals" and "Angst" were from the Annals album sessions, while the rest of the tracks are newer. On the other hand, Jimmy has never been one to fill a CD up with songs just because he can.

One final thought regarding the cover art. I wonder if Jimmy feels like being in Deliverance has stifled his creativity or his real self. The guy's gag has the D papal cross logo on it. I know Jimmy has felt in the past as though he's had to pretend to be someone he's not in order to keep the band running. Maybe I'm reading too much into it...

Useless Fact: No lyrics in the liner notes? *sigh* I has a sad. They are up on the band's website, however.
Posted by The Old Man at 7:53 PM