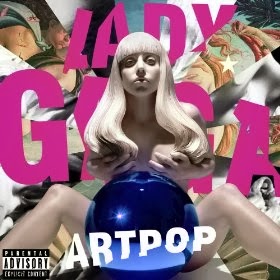 Remember way back when I said that there may be more to Lady Gaga than people think? Yeah... I'm pretty sure I was wrong about that. All I have to say is: thank goodness this is better than Born This Way. It's a little bit of a return to The Fame with simple songs about sex... and drugs... and fashion. I also like the catchy electronic/synth-type stuff that made me like her debut so much. Another feature of this album is the dub-step influence in many of the songs. Not that I mind, there's enough melody in here to make it interesting. I will say I absolutely HATE "Jewels N' Drugs" because it's a rap song. The exact kind of rap that I despise. It's completely out of place on this album. Anyway, nothing here is really groundbreaking but it's still infectious and Lady Gaga's still one of the best singers in pop music today. Let's round this out with some observations:

"Do What U Want" is a duet with R. Kelly in which Lady Gaga tells him he can do anything he wants with her body. I'm not really sure that's the person you want to tell that to. Several of these songs appeared on Lady Gaga's Holiday Spectacular (which starred the Muppets). It tanked in the ratings. Probably because the venn diagram intersection of "people who like Lady Gaga" and "people who like the Muppets" includes four people - five at most. Two of those people are my wife and I. Finally, I have the censored Walmart version (because we were there and that's what they had). I find it hilarious that people think you can clean up a song like "Sexxx Dreams" just by removing the word "sex."

Useless Fact: ARTPOP was also inspired by the pantheon of Greek and Roman gods. The sexy ones at any rate. Oh, and that picture on the cover is actually a statue that someone made. And did you know that up to five people wrote some of these songs?
Posted by The Old Man at 8:35 PM