Weezer - "Everything Will Be Alright In The End" 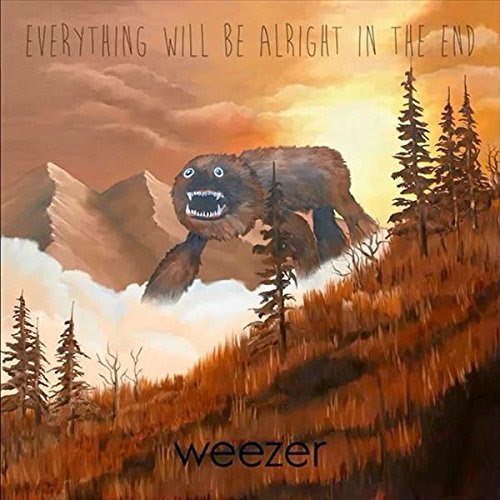 Weezer - Everything Will Be Alright In The End
2014, Universal

I was pretty much done with Weezer after Raditude. A lot of people were. Raditude was such a light inconsequential album. There was one good song that I remember and the rest was just filler and fluff. Shortly thereafter they released Hurley which I didn't even bother to investigate. I was justified in doing so by the reviews which amount to, "not as bad as Raditude." I'd written off Weezer as a band who'd never make another good album again. However, a couple months ago a Rolling Stone article passed before my eyes announcing Weezer's new album and their "return to their roots." I usually roll my eyes at this because waning bands have a tendency to say this whenever a new album comes out. It's usually all smoke and mirrors and the band makes whatever album they feel like. I did hold a cautious hope that maybe this time was true...

Then I heard, "Back to the Shack." A song were Rivers Cuomo pretty much states outright that, "Yeah, all those albums weren't very good because I was trying to be world famous." "Back to the Shack" was a fun song and my hope for a good album burned brighter. It also takes a a certain kind of person to write an apology song like that. Now that I've digested this album for almost a month do I have good news or bad news?

Good news. Great news. Everything Will Be Alirght In The End is a fantastic album. It does represent a return to their roots in some aspects. "Ain't Got Nobody" sounds like it could have come from Pinkerton and "Lonely Girl" echoes the thick chords and down picking that characterized a lot of the Blue Album. I think the thing that really makes this a good album, aside from some of the best songs the band has put out in fifteen years or so, is the energy. There's so much infectious energy here! You can tell the band decided that, successful or no, they would put out the absolute best album they could without worrying about the charts. Heck, they've even got an epic closing track ("The Futurescope Trilogy") that's dang near progressive. I kind of like seeing that side of them. Welcome back, Weezer! We missed you!

Useless Fact: "The British Are Coming" is about the American Revolution. No, really. I guess they wanted to write an Iron Maiden song in Weezer style!