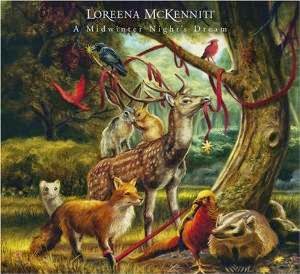 This disc has been on my "Christmas wish list" for a long time. Loreena McKennitt and Christmas music go together like peanut butter and chocolate. One think I like about this album is that it's not full of the same stuff you've heard a million times. There are some recognizable tunes, for sure, but there are a lot of different songs you don't often hear. I've never heard "The Seven Rejoices of Mary" but it's one of my favorite tracks. Also, while you do hear the first verse of "Good King Wenceslas" often enough in movies and television, people don't usually sing the whole song. I quite like this song as well. Basically, if you're a fan of Ms. McKennitt's music you're going to want this album for all your holiday rituals.

Useless Fact: Some songs on this album first appeared on a little Christmas EP called A Winter Garden.
Posted by The Old Man at 9:04 AM