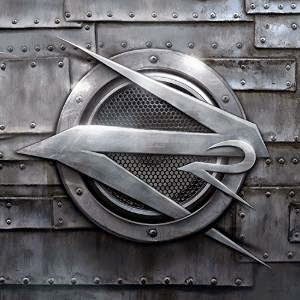 Z2 is the long awaited sequel to Ziltoid the Omniscient. It's been a long time coming too. Devin has said he's been working on it off and on throughout Casualties of Cool and Epicloud. I honestly don't think Devin really wanted to do a sequel. In fact, most of this album isn't even about Ziltoid. It contains two separate albums: Sky Blue - which is just the Devin Townsend Project, and Dark Matters - which isn't really even a sequel to Ziltoid but just another different story. There's no continuity between the two.

Sky Blue definitely evolves the sound that DTP had on Epicloud. While it's still got Devin's signature "wall of sound" chaos going on, it's a lot less commercial, a bit more melancholy, more contemplative. The theme seems to be "life is short so live and love while you can." Devin truly embraces his inner Enya here, especially on tracks like "A New Reign," "Sky Blue," and "Forever." It's also mixed in with some full throttle rockers like "Fallout" and "Silent Militia." He weaves some pretty compelling tapestries on this album that took a bit to grow on me. Anneke van Giersbergen returns to share lead vocal duties, which is always welcome.

Dark Matters is set up like an old fifties radio show with cheesy narration and everything. Dark Matters is certainly heavier and more progressive than Sky Blue but the songs are also simpler and for more melodic hand hook-laden overall. Honestly, the first few tracks kind of run together for me until "War Princess" where I feel like the album really kicks in and starts to get good. I have the three disc edition which includes a raw mix of Dark Matters without all the narration. I actually prefer that to the original as you can really hear what's going on musically.

If it sounds like I'm not quite as excited as I should be about new Devin it's because I still just don't know how I feel about this album. I don't hate it, far from it. I like it better than Epicloud for sure. In fact, I think this is actually my second favorite Devin offering right after Addictied! So I guess I'm saying I don't know what my problem is.

Useless Fact: My buddy Uvulapie actually sings background vocals as part of the Universal Choir.
Posted by The Old Man at 9:34 AM