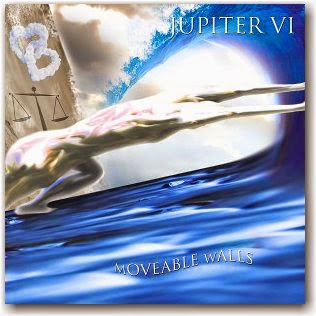 Let's talk about Shovel Knight for a minute shall we? For those who don't know Shovel Knight is a video game - specifically a side scrolling platformer in the mold of an old 8-bit Nintendo game. It takes a lot of its design from games like Mega Man, Castlevania, and Super Mario Bros 3. The game wears its influences on its sleeve. It's quite obvious. But... man... is it a fantastic and fun game. It's got all the charm of the retro platformer (cool sprite graphics, addictive gameplay) without any of the punishing characteristics of some of those old tyme games.

I think Shovel Knight and mOVEABLE wALLS have a lot in common in that it's quite easy to see where the inspiration for each came from. This particular album has all the makings of Pink Floyd, specifically, Wish You Were Here - wherein three shorter tracts are sandwiched between two epics. From the opening thunderstorm crash and guitar swells you just know that Jimmy P. Brown is doing his best Floyd impression. Here's the thing though, while this album is obviously an attempt at Floyd... it's so good. The melodies are haunting. The guitar work is stellar. And even though these are longer, more progressive songs they always keep their focus and are never boring. Heck, I can't even say that for Pink Floyd! You can tell that Jimmy really put his heart into this record. Who knew he had this kind of... soul? Seriously, there is some soulful stuff on here. I have quite enjoyed Jimmy's foray into the world of progressive rock and if he chose to stay there for awhile it would not bother me a bit.

So I'm gonna go ahead and recommend you pick up mOVEABLE wALLS... also Shovel Knight. You should buy that too. Listen to Jupiter VI while you play the game and I guarantee you will have spent your time well.

Useless Fact: I think Jimmy actually completed a second Jupiter VI album called A Message From Home, Pt. 1 and even turned it in to Retroactive Records for release but they never put it out. I have no idea why. This album also has a special edition with an extra CD with some bonus tracks and cover tunes.