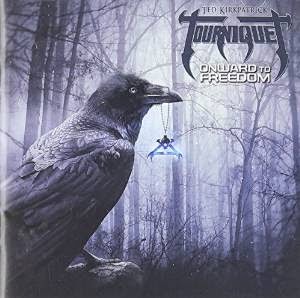 Oh gosh... I'm almost hesitant to write this review. Why? Because Onward to Freedom just doesn't sit well with me. I can't tell if it's the rather overt and insistent vegan message or the fact that it seems like the songs just don't come together for me. Granted, the last Tourniquet disc took a few spins to really register but so far this one hasn't. It's sort of a mash-up of a Ted Kirkpatrick solo album and Tourniquet. Thankfully, it's not six minutes of an ape bellowing over doom metal chords. No, it's more in line with an actual Tourniquet release except it's got a lot of guest vocalists. These (the guest vocalists) were actually pretty enjoyable. It's always good to hear Dug Pinnick sing no matter the subject matter. Michael Sweet also turns in a fine performance. I'm not sure who Gabbie Rae is but her voice is melodic and sweet and very enjoyable.

Though... I don't know... it's not really progressive enough to be a real Tourniquet record. That's okay, by the way. But the fact that after several spins I still wasn't really captivated by any particular tune on here is very disappointing. I loved Antiseptic Bloodbath but Onward just... I don't know...

And about that message. I'm all for more compassion toward animals and what not. My family tends toward free range organic whatever. However, I get the distinct impression that if you found yourself lost in the woods and had to feed off the land, Mr. Kirkpatrick would just rather you go ahead and die instead of harming an innocent chipmunk or something. Should we just... like... never have anything to do with animals ever? That's kind of the vibe I get here. I guess that's my issue, I just get irritated when I listen to this and it gets in the way of the music... and the music didn't wow me enough to get me to listen more.

Useless Fact: This album used to be referred to as The Tourniquet Ark project. Then it was just Tourniquet. they had a really cool Noah's Ark cover for it until they changed it. The new cover was a big fat rhino running out of a tunnel. I'm glad they added the raven cover because I like that a lot better.
Posted by The Old Man at 1:13 PM