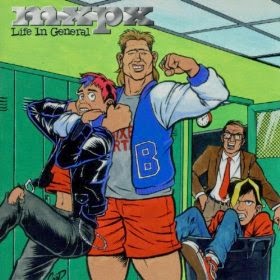 I was a pretty big MxPx fan in my mid-teens. Mostly because that's what there was after the scene transitioned from metal to alternative and punk. Their music never quite stuck with me and even though they've been putting out albums for years I've never been interested in checking them out. Life In General is certainly their best record up until that point. Pokinatcha wasn't very good except for a few songs though Teenage Politics improved the band's sound immensely. For their third outing they've honed their sound to a nice sheen. Their production is good - with a nice meaty guitar tone and little in the way of ear-piercing feedback. The songs retain a lot of their speed but have more commercial hooks as well. A good balance if you ask me. The lyrics are laughably teenagery, but I can't fault them too much because they were teenagers at the time. It just reminds me of when I was a teenager. Though I certainly hope they've matured lyrically since then. I will say that "Middlename" is probably one of my favorite songs of all time.

I was going to see MxPx at Kingdom Bound one year but their show got rained out. They didn't even set up their merch table or anything. I was bummed.

Useless Fact: I can play several songs on this album on the guitar. One of the few times I can pick out the chords by ear. Not that that would be very hard.
Posted by The Old Man at 11:31 AM