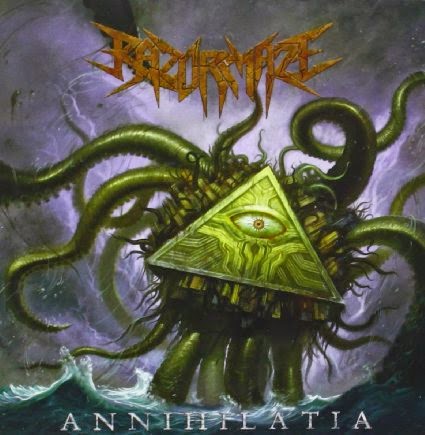 1. Something Like a War
2. The Slowest Death
3. Worshiping the Void
4. Sink  Below
5. Demagogue
6. Electric Deception
7. Terminal Escape
8. Without Words

Here's another album that, if I was honest with myself, I bought strictly for the cover art. 'Cause that is a cool cover right there. Razormaze play fast and furious thrash with just a smidgen of progressive-ness in there. The vocals are varied from thrash shouts to growls to some singing. "Singing" would probably be a better way of putting it. Not that it's bad it's just... metal. However, all the full throttle technical riffing kind of makes the album inscrutable. I mean, usually after a few listens I get used to the music and can really dig in and discover its wonderfulness. However, even after several listens Annihilatia felt very much impenetrable. Like I was locked outside and not able to really immerse myself. Does that make any sense? I'm not even sure why I feel that way as this is not a bad disc in the slightest.