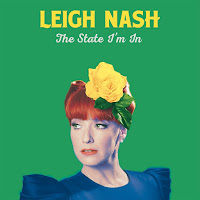 I pretty much hate country music. Let's get that out of the way right now. Especially the insipid "Bro Country" which mostly involves girls, beer, and trucks... and rap somehow. Anyway, Leigh Nash's little country album caught my attention because, being a longtime Sixpence fan, I've known she's wanted to do country stuff for a long time. Like... she was talking about it in interviews for This Beautiful Mess... i.e. a LONG time. So this isn't some cash-in-desperate-grab-at-fame record. Nope, this is an album she's wanted to do. And... I like it. Quite a lot actually. I guess it helps that it's less Florida-Georgia Line and more Patsy Cline, Dolly Parton, Merle Haggard. I was raised on country - Dolly Parton, Kenny Rogers, Alabama, The Oak Ridge Boys... my parents would take rides through the hills of upstate New York and those folks were the soundtrack to many of those rides. Despite my intense dislike for country, there were a lot of songs by those artists that I liked. I think that's why I like The State I'm In because it definitely reminds me of those songs. This may surprise you but some of my favorite tracks here are the more honky-tonk ones like the title track, "High is Better" and "Doing It Wrong." I also like "Mountain" and "What's Behind Me" - both tracks could have been Sixpence tracks (though a little more countrified Sixpence).

I do have some small gripes about this album. First, I don't like the song "Chicago." Part of it is that it's the third slower paced song and by that point I think the album's momentum would have done better with a peppier song. I also don't care for the lyrics which is just the singer pining over some dude, begging him to tell her more about Chicago. I just don't like it. Second, the packaging is really flimsy - it's a thin cardboard digipack that's easily damaged. It does come with liner notes with lyrics, though, so that's good. Despite these minor gripes I enjoyed The State I'm In way more than I thought I would. It's definitely worth checking out even if you don't like country.
Posted by The Old Man at 9:48 AM