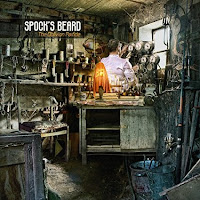 Spock's Beard - The Oblivion Particle
2015, Inside Out

The You Tube robot plopped the "Bennett Built a Time Machine" lyric video in my feed awhile back. I was instantly hooked. I love that song. In fact, it's probably one of my favorite progressive songs of all time. No I'm not lying. The rest of the album is good too. I like how the band mixes plenty of progressive virtuoso playing with good hooks and melodies. This is especially apparent on songs like "The Center Line" and "Disappear." The latter is another song I love to death. I'm not sure if this is a concept album or not because the liner notes feature a story about "Bennett"...as in... the one who built the time machine, but the other songs don't seem to make reference to it, so I don't know. It's a good album and I may have to get into more Spock's Beard in the future.

Useless Fact: Um... Neal Morse was in this band? Yeah, I know everyone knows that but I don't know the band well enough for a really good fact.
Posted by The Old Man at 8:43 AM