Iron Maiden - "The Book of Souls" 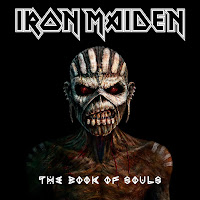 DISC ONE
1. If Eternity Should Fail
2. Speed of Light
3. The Great Unknown
4. The Red and the Black
5. When the River Runs Deep
6. The Book of Souls

DISC TWO
1. Death or Glory
2. Shadows of the Valley
3. Tears of a Clown
4. The Man of Sorrows
5. Empire in the Clouds

I didn't really know too much about The Book of Souls other than that I'd seen it around for sale. Naturally, I bought it one day while getting groceries. I mean, it's friggin' Iron Maiden. How bad could it be? Seemed like a pretty low-risk investment. Imagine my surprise when it turned out to be a double album with some truly epic tracks. Quite a few here are over the ten-minute mark, not to mention "Empire of the Clouds" which is a whopping eighteen minute opus. I'm pretty impressed that a band that has been around as long as these guys can sound so alive and energetic. You could group this album in with Number of the Beast or Powerslave and no one would be the wiser. Bottom line, if you like Iron Maiden, you will dig these discs.

I do have a couple of complaints though. First, the production seems a little dated here. When I said you put this next to those other albums I meant it... unfortunately that seems to include some dated production. I also think a couple of tracks could have been trimmed a bit. I love the rollicking "The Red and the Black" but there's an extended galloping session near the end that I think could have been trimmed a bit. Also, Bruce Dickinson seems a big strained here. Though, considering he was battling cancer at the time I think I can give him a pass. That's how tough that man is. "Oh, I've got cancer? Let's record a double album! What do you think about that, cancer?!" As of this writing, he did beat that cancer.

Useless Fact: "Tears of a Clown" is a tribute to Robin Williams and I understand "The Man of Sorrows" is about Aleister Crowley.
Posted by The Old Man at 10:51 AM