Coheed and Cambria - "The Color Before The Sun" 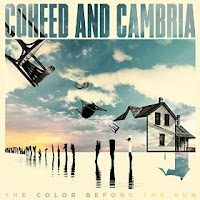 Coheed and Cambria - The Color Before The Sun
2015, 300 Entertainment

Well... it had to happen eventually. I knew at some point Coheed and Cambria would have to make an album without a concept. The question, of course, is can a band whose stock and trade has been convoluted concept albums their entire career even pull something like this off? The Color Before The Sun might not overthrow my favorite Coheed album (Good Apollo, Vol. 1 if you're wondering) but some of the songs on here are some of the best of their career and that is not an exaggeration. Song's like the haunting "Ghost" or the uplifting and energetic "Atlas" leave their mark for days in your brain. "You Got Spirit, Kid" recalls some of the bouncy radio-friendly tunes like "Blood Red Summer" or "The Suffering." The album closer, "Peace to the Mountain" is altogether different being one of my favorite Coheed songs of all time.

It's kind of weird to listen to Coheed lyrics that make sense! The band is far less angsty and dark on this album and the hope and exuberance for life shines through. This is a good thing as I don't think you can only be angsty so long before it starts sounding fake. This is certainly the most optimistic record they've ever done. Again, this is not a bad thing. I'm happy to see the band evolving and challenging themselves. While as a whole  The Color Before The Sun isn't quite as compelling as some of their other albums, the songwriting is still top notch and contains some phenomenal songs. I have no reservations about the future of the band anymore.

Useless Fact: I think "Atlas" is actually the name of singer Claudio Sanchez's son.
Posted by The Old Man at 9:03 AM