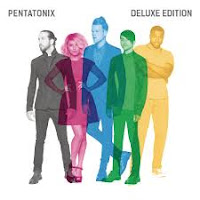 We love Pentatonix at our house. I've said it before and I'll say it again: if you like music and can't find something to like about these guys, you're going to want to see a neurologist or something because something is wrong with your head. While the group has proven they can make any pop song better than the original version, this is the first time they've done an album full of original songs. It's great, of course. Their knack for fusing acapella with pop sensibilities remains and produces some of the best pop songs I've ever heard. Seriously, "Can't Sleep Love" is an almost perfect pop song. Other songs, like "Water," and "Sing" will get stuck in your head for days. "Light in the Hallway" is an amazing tune with layered vocals and poignant lyrics and one of my favorites as well.

I do have a couple quibbles though. One, it seems like Scott (the one who looks like a Twilight vampire) gets a lot of lead time here. One would almost be tempted to think he's the lead singer with the other folks backing him up. He sings lead on a good share of the songs here. That's not bad, per se, but for a group with this much talent in its ranks I'd like them to share the spotlight a little more. Each person does seem to have their own song (Kirsten's is "Water," Avi's is "Light in the Hallway"), but I like it when they work as a team more like on their covers and Christmas stuff. Also, there's a few songs that sound a little too radio friendly. Stuff like "First Things First" and "New Year's Day" conform more to the pop standard I think. One of the things I like about the group is that they break away from the standard modern pop sound. Anyway, minor things aside, Pentatonix is great and we'll probably be listening to it well into next year.

Useless Fact: Scott and Mitch (the little one) have a You Tube channel called "Super Fruits." My wife tells me it's very amusing.