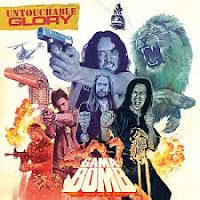 I'm a little bit sad that I didn't pick this one up earlier. That way it could have been a contender for picks of the year for 2015. Oh well... there's next year right? Anyway, Gama Bomb continues their thrash metal assault against the senses with another blistering release. One challenge the band has always faced is making their songs distinctive. Admittedly, it's hard to do that when you're just balls to the wall thrash. However, I'd say Untouchable Glory is probably their most catchy and memorable album to date. Each song has a cool riff or hook to differentiate it from the rest. They even slow things down a bit with "Tuck Your T-Shirt In" - and by, "slow down a bit" I mean "not be pummeling for a few bars." Remember when I said back in the Citizen Brain review that I didn't know if I'd want album after album of this? Wow... what innocent times. I would totally want album after album of this. I think it's the combination of thrash and tongue-in-cheeck, self aware lyrics, giving the music a playful sense of  fun that keeps me coming back for more. Put simply, Gama Bomb rocks.

Useless Fact: If you couldn't tell, the cover art is inspired by 70's Kung-Fu films. Though the songs don't really follow suit, they're more about various sci-fi/horror/pop culture stuff.
Posted by The Old Man at 10:08 AM