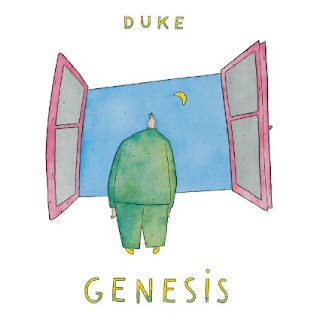 
Some decry Duke as a sellout, claiming it’s the final nail in the coffin for a once great progressive rock band. They claim Phil Collins ruined the band and that it became infested with puerile sugary pop. Yet others say Duke is a masterpiece that perfectly blends their progressive rock past with more pop melodies and sensibilities. I especially appreciate how opinions are either one or the other. Reviews I’ve read tend to be passionate - extreme hate or extreme love. I haven’t read one that said, “Duke? Meh.” Nope. Duke is an album that provokes some pretty strong emotions.

I can’t imagine what the reaction would have been of someone who’d heard “Misunderstanding” or “Turn It On Again” on the radio and bought Duke thinking they were going to get some catchy seventies pop. The album does not start such a casual listener off gently. “Behind the Lines,” “Duchess,” and “Guide Vocal” start a one-two-three punch of progressive mastery. I always knew Phil Collins played drums, but I never knew just how good he is. These three tracks were a revelation and I was in awe of the vibrant, expressive drumming on display. Next we get the rolling and contemplative “Man of Our Times,” which isn’t exactly radio material either.

Finally, “Misunderstanding” provides the first taste of what I would call “pop” as it’s pure seventies radio rock. Of course, it’s followed by “Heathaze,” which is a fairly mournful sounding tune. In fact, the album itself is, despite the bright, melodic synths everywhere, quite morose. Phil Collins was going through a divorce at the time and wrote “Misunderstanding” and “Please Don’t Ask.” Despite the former’s more upbeat sound, it is quite poignant, as is the later – especially when Collins tells his estrange wife that he misses his boy and that he “hopes he’s good as gold.” You’ve also got “Alone Tonight” which is another song filled with longing for lost love.

How is this a sellout again?

The album ends with “Duke’s Travels” and “Duke’s End” a duo of mostly instrumental progressive rock tunes that recall the three intro tracks. Naturally, these are a perfect finale. Of course, “Behind The Lines,” “Duchess,” “Guide Vocal,” “Turn It On Again,” and the last two songs were meant to be a suite called, “The Story of Albert.” They were broken up because the band didn’t want it to be associated with their other epic, “Supper’s Ready.” It also probably had something to do with not overwhelming our hypothetical record buyer who really liked “Misunderstanding.”

Now I haven’t heard any other Genesis albums yet so I don’t admittedly have much perspective. However, I tend to agree that the album is a good mix of prog rock and pop. It’s still pretty accessible while still throwing some challenging material at the listener. At first I had to get used to all of the synths and keys and the slightly seventies sounding production (some of which I’m still not used to). “Man Of Our Times” took some time to grow on me. However, with each listen I found myself enjoying and appreciating it more and more. It’s too early to tell if it will be one of my favorite Genesis albums, but I really like it now. If any of the other albums are of similar quality, I will have a good year, indeed.

Useless Fact: Apparently Mike Rutherford regrets not putting Phil Collins’ solo hit “In the Air Tonight” on Duke.
Posted by The Old Man at 8:58 AM