Steve Taylor and the Danielson Foil - "Wow To The Deadness" 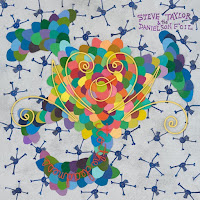 Steve Taylor and the Danielson Foil - Wow To The Deadness
2016, Sounds Familyre

I didn't quite expect to get some more Steve Taylor quite so soon, if ever. As the name implies, Daniel Smith from the Danielson Famile joins the guys for this little EP that was successfully kickstarted last year, I think. I was a little worried because I've never been a huge fan of Danielson Famile. They were just too weird for me and Daniel's voice wasn't really my cup of tea. It doesn't bother me here though. Of course, he doesn't sing much - just backing vocals and lead on "Drats" but it actually goes together well with Steve's vocals. The music is in a similar vein to Goliath, though maybe a little rougher around the edges. Not that this is a problem. I really like these tunes. Naturally, the only problem is that it is just too short. The songs are short and there's only six of them. Hopefully we can get some more soon (as in next year, maybe?).

Useless Fact: For this album, the guys dressed up in different color jumpsuits... like indie Power Rangers or something.
Posted by The Old Man at 10:36 AM