The Genesis Project - "We Can't Dance" 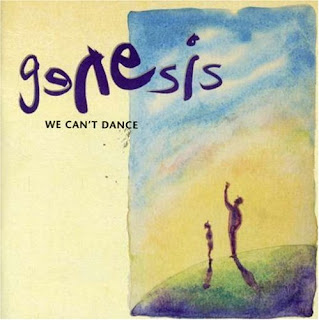 
We Can’t Dance was Phil Collin’s last album with the band before he would leave to score Disney movies and what not. I remember this album pretty well because I watched MTV incessantly back in the day. The hits were in heavy rotation. Thus I saw a lot of “I Can’t Dance,” “No Son of Mine,” and “Jesus He Knows Me.” I really liked those songs and was happy whenever they came on. It seemed like, to the untrained eye at least, that they were continuing with the progressive influenced pop of Invisible Touch. I’m not sure if this was quite the height of their popularity, but they were fantastically successful and still selling out stadiums.

Unfortunately, as an album, We Can’t Dance is very much of two minds. The first one is quite like I’ve talked about already – former progressive rock musicians making tight, meaningful pop songs and occasionally going full prog just for fun. I’ve already talked about the “hits” and how they are smart, catchy pop - just what I would expect from the blokes who made the previous album. “Driving The Last Spike,” “Dreaming While You Sleep,” and “Fading Lights” are the album’s more epic, progressive tracks and are quite good as well. “…Last Spike” being the kind of story-tellery thing you’d find on one of the Gabriel-era albums.

Unfortunately, there’s the other mind (for lack of a better world). This one is quite lazy and content to churn out some of the most half-hearted adult contemporary schlock it can get away with. We’ve got “Never a Time,” which even after several listens I still do not remember one note of. Then, “Tell Me Why” – this one was a hit but heaven only knows why. It’s just bland and the sentiment is the same sort of "bemoaning the state of the world" that appears on Collin’s solo records. Let’s not forget “Hold On My Heart” which is like “In Too Deep” if it was about one hundred times more boring and nondescript. “Way of the World” is another forgettable, throwaway track.

What would help this album immensely is if, like its predecessor, it was only eight tracks long. Then it would be on par with the rest of the Genesis catalog. Sadly, it’s bloated with these apathetic, cash grab songs. I swore I wasn’t going to ever claim that the band was "ruined" or that they “sold out” but… We Can’t Dance is where I can say, “Yep, definitely some selling out happening here.” I don’t place the blame for this squarely on Phil Collin’s shoulders because all three members wrote the album. No, I just blame time and success. It’s ironic that “I Can’t Dance” is about commercialism when this particular album finds the band at its most commercial.

The worst part is that none of that was really necessary. Duke and Invisible Touch were monster albums! Both succeeded in what they were trying to do. There’s no real reason to fill up this album with boring adult contemporary tracks when they are capable of making successful art that is also acceptable by the masses. I’m not sure what they were thinking other than being bored and lazy. The boys needed a new boat, perhaps?

The best I can say about this album is that the good songs are still really good – you’ll just need the skip button handy to sail past the crap tracks.

Useless Fact: "Since I Lost You" was a song written for Eric Clapton after the death of his son.
Posted by The Old Man at 9:55 AM