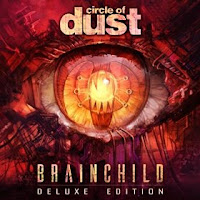 I've mentioned before that Brainchild started as an actual band called Brainchild but it reissued under Circle of Dust. Well, now it gets another reissue and - as before - this is this album's final form as well. The mastering is just about perfect. There's tons of cool extras, like the new track "Contagion" and "Am I In Sync?" from the Steve Taylor tribute if you missed that (which, how could you do that, YOU MONSTER!). It even contains the original versions of "Telltale Crime," "Prayers of a Dead Man," and "Deviate" for those moods when you're really, really nostalgic. Again - this is an excellent package and well worth getting even if you have the previous versions. However...still no liner notes! Argh!

Useless Fact: Documentation seems to imply that the original Braindchild album came out in '92, but that's impossible because the first Circle album came out in '92 and Brainchild didn't come out at least until the following spring, making its release year '93. Can anyone confirm Mindwarp's actual release date?
Posted by The Old Man at 10:00 AM